You are here: Home > Dancing Grandmothers | The Korean grandmothers of choreographer Eun-Me Ahn

The ‘Dancing Grandmothers’ from Korea are an international sensation. ‘On stage these grandmothers become bombshells of exuberant energy, joy and seduction’, according to the French newspaper Le Monde. Choreographer Eun-Me Ahn, alias the ‘Pina Bausch of Seoul’, gives a ‘voice’ to different generations from her country of birth in a trilogy, Dancing Grandmothers is the first part. “For these older women dancing means freedom, happiness.” And the audience? “At each performance they rave.”

With the genre ‘road movie’ you generally think about asphalt, run-down cars, unshaved heads and inner turmoil. But the ‘road movie’ that was the basis for Dancing Grandmothers – and is part of the performance – is a completely different caliber: set to a mix of folk and electronic music we see old ladies, grooving and swinging in, among others, a hair salon, laundromat, supermarket, at the beach and at a train station. And they all move at an upbeat tempo, according to more or less the same patterns, catchy and radiant. Choreographer Eun-Me Ahn wanted, she says, give their dance a ‘face’. In 2010 she traveled through her country of birth with four of her dancers and three cameras to talk to older women in cities, but especially in the country about dance and to capture their movements on film. “At festive occasions there always is a lot of dancing and I wanted to do something with these traditional Korean movements.”

Most women we approached during our journey were hesitant and negative at first. They thought they would be on television when they saw the cameras. But when we explained our motives and danced for them they softened. We talked and then they would also dance for us.”

Dance offered – and offers- these women a chance to escape their daily existence, Ahn says. “Most older women in Korea haven’t had an education. Take my mother, she was born in 1932, lived under Japanese occupation until she was twelve and after the war everything was geared towards rebuilding the country and having children. Women went through a difficult time in those days, during the day they had no freedom whatsoever, but late at night many of them danced and sang. It was a way to experience something resembling happiness and freedom. And we constantly found this during filming: you could see the smile appear on their face, their eyes would shine and after a while their body would change. You could practically see particles of happiness being released’.

Ahn quickly realized: “I want to make a performance with a number of them, combined with my own dancers.” This was quite difficult for the young, professional dancers”, she says. “They found it hard, there was a lot of extra rehearsing, everything went much slower than they were used to so it too a lot of extra energy. But now that the production is up and running they are very pleased with it. They see that the grandmothers (who have since been replaced by a new group of women between 60 and 90 years of age –AvL) bring an authentic energy, that dance is not just about physical power and technique. The grandmothers dance straightforward, from their heart, but they can convey anything with their body: happiness, joy, but also sorrow and suffering.”

Ahn used traditional dance as a starting point for her exuberant choreography and constantly alternates scenes with the older women, the young dancers and both groups together. In doing so she bridges the gap between the generations, something that is enhanced by the bright colors, stripes and flowery patterns of the costumes of the grandmothers. Ahn, who also dances in the production: “I developed a basic structure for the dancers, but other than that everyone is free to interpret and color the dance themselves.”

Dancing Grandmothers turns out to be, says Ahn, a genuine performance for all ages. “We see that in particular young people are deeply affected by it.” At the end of the choreography (a part of) the audience is invited to join the dancers on stage. Ahn, enthusiastically: “People then really lose it, they start to scream, everyone wants to dance with us.” Laughing: “And can you blame them: when do you have the chance to dance with Korean grandmothers?”

For Ahn Dancing Grandmothers was such an eye opener that she subsequently decided to also create Dancing Teen Teen and Dancing Middle-aged Men. There is, certainly in Korea, a deep divide between the various generations, but dancing connects people, it has the same positive effect on everyone. The biggest challenge with the teens was that they had trouble being authentic. Most of them, with the exception of a few wonderful youngsters who were really hilarious in how they used the camera and the music, most of them initially just copied each other. The middle aged men were just really shy in the beginning. All of them ‘baby faces’, Ahn jokes. “They thought they weren’t good enough, because they compared themselves to hip hop stars and jocks. But in the end they were so happy when they dared to surrender to the dance.”

What has Ahn personally learned from her trilogy? “It has further broadened my perspective on live and on dance. Since then I have worked with more ‘special’ groups in dance productions, like the blind, little people, trans genders and mothers who lost a child in the military. Dance gives them – just like it does for the grandmothers – the opportunity to express their deepest feelings. Feelings that can almost never be expressed in words.” 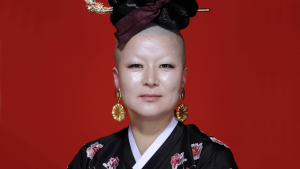 The Seoul born Eun-Me Ahn (“I won’t tell you my age”) is a remarkably quirky artist and, she realizes herself, a curious figure. “Because of my appearance and my high-speed energy I am not an ordinary. When people meet me they are usually completely in shock.”

In articles the work of the Korean is often called rebellious and provocative in one breath. “The first is absolutely true”, she says. “You have to be like that: rebellion is the basis of art. But I am not out to deliberately provoke. What I strife for is for me to stimulate people to look at art with an open mind, that I share new, unexpected things with them, but always in a positive way. And afterwards we can be friends”, she says smiling.

As a child Ahn had a surplus of energy, but she didn’t like sport at all. “When I was five I saw a Korean dance group. I was immediately hooked. Especially by the bright colors of their costumes – ‘regular’ Koreans were mostly dressed in dark colors in those days. But Ahn only studied traditional Korean dance for a short time. She quickly realized that modern dance suited her far more. “In modern dance the future is yours. You don’t have to follow any rule or regulation.” Roaring with laughter: “I hate rules.” After a dance education in Seoul she worked in New York for nine years until she was asked in 2001 to become artistic director of the Deagu City Dance Company, the first contemporary dance company in South Korea. Since 2005 she heads her own group Eun-Me Ahn Company and the works she created there earned her the nickname ‘he Pina Bausch of Seoul’. “I find that to be a great honor. Pina and I were friends for ten years and she – as one of the most import representatives of twentieth century dance – has given us such beauty and emotion.” 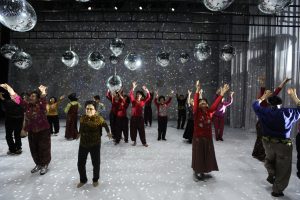 Eun-Me Ahn Company’s Dancing Grandmothers can be seen in the Stadsschouwburg Amsterdam on the 24th of January and in the Theater aan het Spui (The Hague) from the 26th til the 28th of January.  More info and tickets >