You are here: Home > ‘I was struck by the hunger, enthusiasm and openness of the dancers’ – Johan Inger, Aterballetto

The Italian Aterballetto is more than forty years old. While in their early years the company danced fairy-tale ballets such as The Nutcracker and neo-classical works by George Balanchine, the group grew to be the contemporary dance company of Italy under the leadership of Mauro Bigonzetti. That qualification still applies, even more so now that the wind of change is blowing at Aterballetto. “It’s not just about your development as a dancer here, it’s about developing as a human being.” 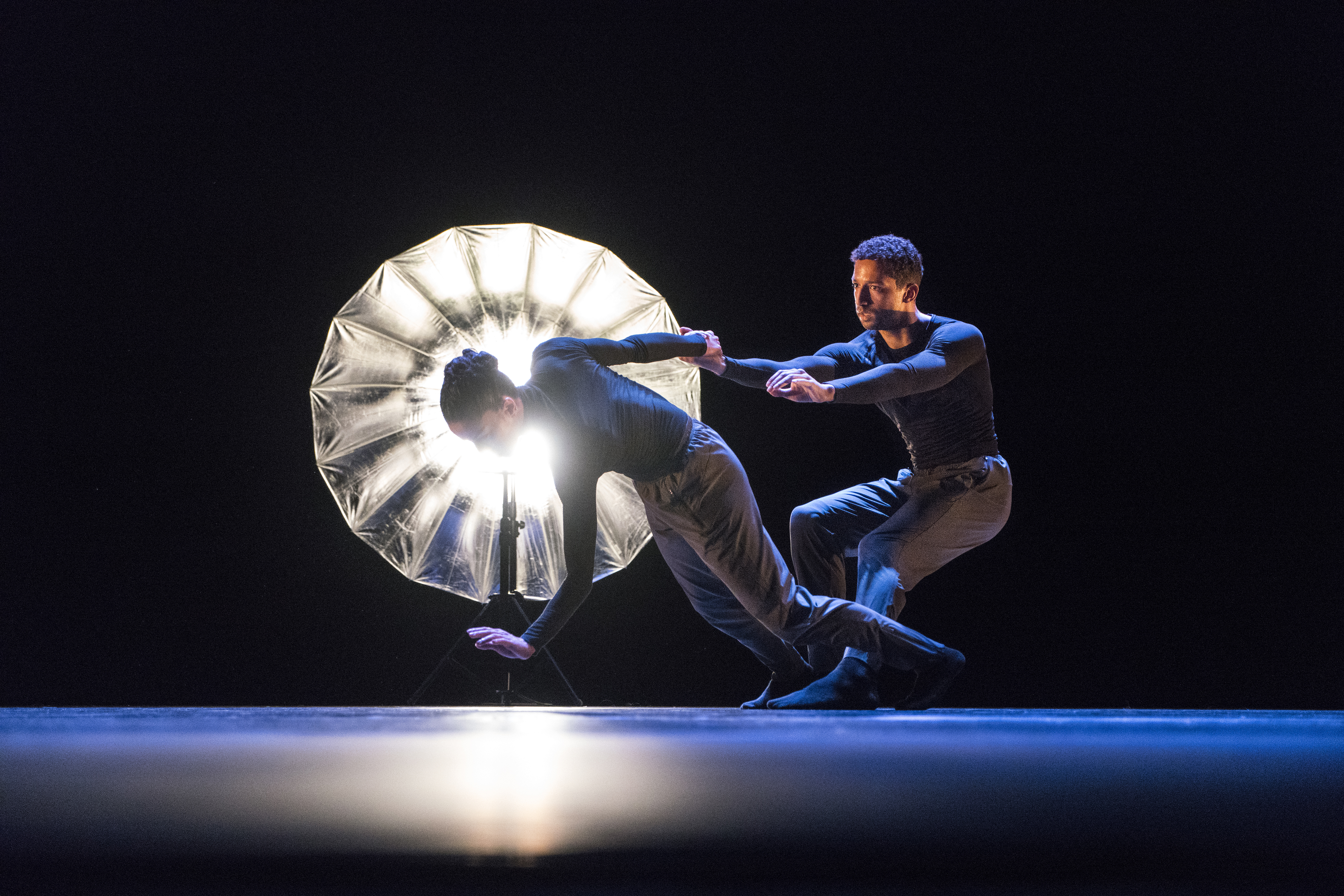 Formula 1 driver or professional skier. For Grace Lyell – born in London, raised in Toulouse – those were her dream jobs as a child. But it turned out differently. “My mum was a single mum with little money and four children. The only entertainment she could afford for us on Wednesday afternoons were classes at the local ballet school. And later, when we would spend summers in Barcelona, she was happy to drop us at Companyia Juvenil de Ballet de Catalunya’s summer programme.”

Both her sisters continue to dance – Georgia at Club Guy, Roni in Groningen. Her brother is the only one who quit. “Even though out of the four of us, he probably had the best rhythm and feel for dance.” Grace (23) was accepted into NDT 2 at seventeen, the youngest in her year, and after “two fantastic years, enriching in every aspect” transferred to Aterballetto. “I’d actually already decided to go to India long-term, but (former NDT dancer) Aurélie Cayla insisted that I audition for Aterballetto, where she’d just rehearsed Jiří Kylián’s 14’20”.”

It was the best advice she could have gotten, Grace says now. “I immediately loved it here. Here in Italy, I truly and fully discovered the beauty of the dance profession, and my part in it.” She laughs. “Dancing is great, dancing is pretty cool, I came to that realisation here.” Hofesh Shechter’s Wolf, one of the pieces Aterballetto is presenting at the Holland Dance Festival, has definitely played a part in that, Grace says. “I already had the opportunity to see Hofesh at work at Nederlands Dans Theater, where he was making Clowns at the time, and I fell in love instantly, was mesmerised by his style and approach. Wolf – an adaptation for sixteen dancers of his earlier creation Dog – feels like one big animalistic celebration. The meditative opening solo I was allowed to attempt is followed by several extraordinarily energetic group pieces, where the women and men alternate in letting loose the animal within. It truly is my favourite choreography, almost therapeutic, because you can give it your all.”

Earthquake
Since 2004, Aterballetto has been located in a renovated former steel factory, just north of the ancient centre of the Italian Reggio Emilia. The old facade remains and floods the largest rehearsal studio with gorgeous yellow-green pastel light. “We didn’t have our own building before,” managing director Gigi Cristoforetti says. “We rehearsed in the attic of the famous Teatro Valli, until our studio was badly damaged during an earthquake and we were forced to wander for several years.” Cristoforetti was appointed in 2017 and has turned Aterballetto into more than a dance company, which has also led to its new name: Fondazione Nazionale de la Danza/Aterballetto. “Our mission is manifold, these days. Not only do we want to produce performances at the highest level, we also want to play an important part in the promotion of dance in Italy and of Italian dance in Europe. Furthermore, we’ve been actively looking to work with other art disciplines and, like Holland Dance Festival, we organise a wide array of participation projects for diverse groups, like young children, the elderly and people with disabilities.”

While Cristoforetti is mostly focussed on Aterballetto’s new, broader set-up, Sveva Berti has been responsible for the daily artistic management of the company since 2018. The 55-year-old Florentine has had a long history with the company, which she quickly and summarises without further ado. “I entered into Aterballetto’s service as a dancer at nineteen, then led by artistic director Amedeo Amodio. I went on to marry Amodio’s successor, Mauro Bigonzetti, with whom I have a 32-year-old child. After I quit dancing, I rehearsed Mauro’s ballets around the world and after Mauro handed over artistic management to my mother, Cristina Bozzolini, in 2012, I became Aterballetto’s ballet master.”

Identity
Berti, who has since divorced Bigonzetti, is praised for her humane approach by her dancers. “You’re not a number here, you’re valued as an individual. You get all the space you need to discover who you are, as a dancer, but also as a human being,” says Philippe Kratz, who has been dancing with Aterballetto since 2008 and has also created various choreographies for the company in recent years. Berti herself says: “Many directors think it’s not possible: exude authority and be considerate of the human side of things, but I think that’s nonsense. As artistic director you’re not a psychologist, but it is definitely important to know and understand a little about the personal lives of the dancers. To contribute to having their development run parallel to their mental and emotional development.”

Berti is also outspoken in her artistic ideas. “Finding your own identity as a company is not easy in this age, we’re at a point where everyone has seen everything; the same choreographers pop up all over. Of course, we also need big names like Ohad Naharin, Jiří Kylián and Hofesh Shechter. But we also deliberately choose to really go deep with some choreographers, by committing them to our company for longer periods of time, and we invest a lot in new choreographic talent. You can see that threefold policy in the programme we’re presenting at Holland Dance Festival.”

Human Robots
Apart from Hofesh Shechter as one of their ‘big names’, Aterballetto introduces the young Philippe Kratz, mentioned above, during Holland Dance Festival. Kratz’s choreography “O” won first prize last year during the international choreography competition in Hannover. “I made “O” when I had a little less to do in the group as a dancer for a while. I needed an outlet for my creativity and energy,” the 34-year-old German says. Together with dancer Ivana Mastroviti – “one of the best dancers I’ve ever seen,” the choreographer says – he spent his free time in the studio. “I wanted to study how fast and precise you could move.”

Another important source of inspiration for his duet was a news item from the summer of 2017, that said two humanoid robots in Hong Kong had communicated with each other for the first time. “With my duet, I mostly wanted to celebrate the joy of such a first meeting, the fact that robots – just as human beings – can now share things with each other. Though there is a dangerous side to that.”

That’s why the large ‘photo studio umbrella’ that dominates the theatre stage refers to the evil supercomputer HAL 9000 in Stanley Kubrick’s film 2001: A Space Odyssey. “I wanted to integrate a memory of that movie and of that machine that was disastrous to humanity in my duet, but without forcing anything on the audience. Everyone can have their own interpretation of the choreography.”

That “O” won first prize in Hannover still baffles him. “Ivana and I travelled to Hannover with Jiří Kylián after a day of rehearsing, and only arrived at one in the morning. The day of the performance, we were so tired and barely had the time to rehearse the duet or properly light it. When the jury called out the ten finalists and we were the tenth, I didn’t even realise it at first.” He laughs. “I thought the chairman of the jury just said ‘oh’, and only later realised it was the title of my choreography.”

Dance Jam
The third Aterballetto piece in the Holland Dance Festival programme is Bliss by the Swedish choreographer – now living in Seville – and former NDT dancer Johan Inger. He’s one of the dance makers the Italian company made a long-term commitment to, initiated by Berti. “My first encounter with Aterballetto was in 2013, when I was rehearsing my choreography Rain Dogs there, and I was sold immediately,” Inger says. “I was overwhelmed and struck by the hunger, enthusiasm and openness of the dancers. Mauro Bigonzetti had left the group the previous year and it was obvious that Aterballetto was looking for a new identity. The past few years I’ve seen a tremendous growth in the company, all the new impulses have broadened and deepened the reference framework of the dancers.”

Inger created Bliss in 2016 and the choreography was immediately awarded with the Premio Danza&Danza for best dance production. Keith Jarrett’s masterpiece Köln Concert was the foundation for the creation. “It was nerve-racking to decide whether or not I dared to use such a monumental piece, a piece of music so many people know. I felt like it could either go great or really wrong.”

Jarrett’s composition consists of several improvised solo piano pieces, recorded in 1975 in the opera house in Cologne. Inger: “I wanted that element of improvisation in my choreography, that feeling of a jam. Despite the fact that every step is choreographed, I wanted to convey that same spontaneity, swing and purity that Jarrett’s music conveys, make the music visible in a way.”

It is special to Inger to have the whole of Bliss be part of the Holland Dance Festival this year, after dance students of the Royal Conservatory already performed a fragment of the choreography during the last edition. Inger: “Jarrett’s Köln Concert takes me back to the time I spent in the Netherlands, to when I moved to The Hague from Sweden as a 23-year-old and basically started my adult life there. In The Hague, I got into a relationship with dancer Elke Schepers, who was a huge fan of Jarrett’s. The Köln Concert takes the dancers through different moods, but to me Bliss is mostly connected to the nostalgia I feel when I think of my years in the Netherlands.”