‘Brave and brilliant.’  ‘Vertical Influences will blow your mind.’

The latest show by the Canadian Le Patin Libre received five stars reviews worldwide. The collective of champion skaters – that purposely turned away from competitive sport and commercial shows like Holiday- and Disney on Ice – is the first in the world to explore the potential of contemporary and urban dance on ice. “In a sense we ‘filtered’ the art of ice dancing like a painter that fills the canvas with merely a red square.” 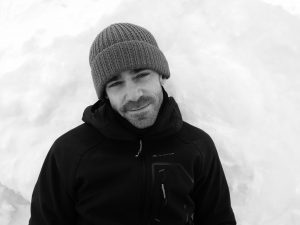 “A bunch of frustrated grumpy male skaters”. This is how Alexandre Hamel describes himself and other founders of Le Patin Libre, smiling and with a great sense of irony. Hamel: “Speaking for myself: I was tired of winning medals. From when I was nine until I was twenty two all I ever did was participate in figure skating matches. For a short time after that I did some shows but I quickly realized: Disney on Ice is really not for me.”

Hamel radically changed course in 2005 and started Le Patin Libre with four other figure skaters who felt the same dissatisfaction. “The name says it all: we wanted to keep on skating but at the same time we wanted to be free and independent and use our passion for dance in a completely different manner.”

“ We started out very basic: during the winter carnival in Quebec and at other ‘outdoor parties’ we would give short shows on frozen ponds and ice skating rinks. It had nothing to do with traditional figure skating, which would have been totally inappropriate for those events. We did a simple acrobatic routine and made up all sorts of weird stories around them. By the way, we stopped doing that pretty quickly because we are bad actors and you have to stick to doing what you’re really good at, and that’s skating.” Hamel says that for him and his friends that first period was “absolutely freeing”. “Precisely because we started out small we could experiment endlessly. With crazy things, complicated things. Each new discovery gave us an intense sense of joy.”

The first of the more professional shows of Le Patin Libre, according to Hamel (now 33) veered between folk and rock-‘n-roll, with a lot of humor and acrobatics thrown in. “And we still love to do those kinds of performances from time to time. But slowly but surely our style developed towards abstract contemporary and urban dance. “In a sense we ‘filtered’ the art of ice dancing, cleansed it of all superfluous pretension and frills and reduced it to the essence. Like a painter that fills the canvas with merely a red square.”

The base is, Hamel says, the technique of gliding. “At the heart skating is obviously not about complex twists and jumps but about the gliding. Indeed, when you eliminate all those spectacular gems it turned out that gliding – in an immobile or a particularly bizarre position – had an enormous effect. Simply gliding together in a circle can be downright mesmerizing. Then we started to add other elements, but the gliding is the core.” 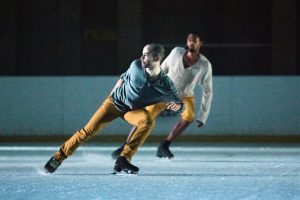 But that certainly doesn’t imply that the shows by Le Patin Libre aren’t virtuoso. “Even if we are doing something totally different, as a group we want to maintain the virtuosity and that extreme control over the body. Four of us are former champions in various styles: ice dancing, freestyle, etcetera. We all have different qualities and a different physique. One is tall and has specialized in martial arts as well as skating, I myself am a small, explosive jumper and Pascale Jodoin – the only lady in the group – is extremely feminine but at the same time very muscular.

The fifth member of the group, Jasmin Boivin, is self-taught. He started out with us as a composer. He used to play ice hockey – almost everyone in Canada does something that requires skating. But when he started to work with us he began to dance on ice for the first time, in a style that was very close to urban dance, and I tell you: I have never seen someone develop virtuosity this quickly.” Being open to outside talent is characteristic of Le Patin Libre. “For our next show we recently contracted ten dancers. Most of them have a successful background in competitive skating, but we also hired two weirdoes’ that pushed themselves to great heights.”

Vertical Influences, the show that Le Patin Libre will present at the Holland Dance Festival consists of two choreographies. “The name is – because of the sound – upside down, since we start with Influences, inspired by the juxtaposition between the group and the individual. For this we worked together with Ruth Little, a dramaturg that predominately has made her mark in the field of theatre, more specifically with plays without dialogue. She has thoroughly analyzed our choreographic experiments and us. She made us use words in anything we did without saying them out loud and from there the theme of the group versus the individual naturally emerged. And it worked really well: there’s no dialogue in the choreography but everything we do has meaning. Spectators all see something different in Influences, but what we hear back from people is very close to the feeling we were trying to convey.”

In Vertical the group builds on the same theme but now, Hamel says, there is more mutual harmony. Laughing: “This is the feel good part of the performance”. The audience is brought up on the ice in Vertical and is very close to the performers. “Vertical triggers the senses. As a spectator you really feel that you are part of the performance. You feel the wind in your hair and experience the vibration of the music.”

The group of dancers of Le Patin Libre has been touring now for six years in the same constellation (four men and one woman) with Dirty Laundry / Confidences and Vertical Influences. “This creates a sense of family. We live with each other and most precious: we share the same passion. It is not an easy life to be constantly on the road, but for us it’s the greatest thing. We love each other.”

Hamel says that he has been able to make peace with figure skating because of Le Patin Libre. “Figure skating ultimately is something that is forced upon you as a child. Not necessarily by your parents as much as the ‘system’. Hopefully you start of your own free will, but then before you know it figure skating becomes your identity. Especially if you’re a boy. Everyone loves you, thinks you’re a ‘God’. The figure skating sport is a very conservative and lucrative world and that’s why – certainly if you’re parents have invested an enormous amount of money in you – it’s not easy to quit. Most figure skaters that I know are aware that it is cheesy and old fashioned what we do, but regardless we put on our biggest smile and continue. Fortunately, with Le Patin Libre, I have learned to appreciate again what I do and what I want to do. Now I am no longer ashamed. Now I’m no longer afraid to invite friends to my shows, I can be proud of what I do. Because I like what I do.

Le Patin Libre’s Vertical Influences can be seen at the Uithof from the 23rd until the 27th of january. More info and tickets >