“The new Petition Mort is a gem (...) It is amazing how well the power, aggressiveness and capriciousness displayed appear to go together with the chosen slow movements from Mozart's piano concertos - NRC Handelsblad”

Arnhem-based Introdans is celebrating its fiftieth anniversary! To celebrate this, the company has put together an extra jubilee production that will only be performed during the eighteenth Holland Dance Festival.

In this production Introdans establishes a clear relationship with the festival and with the city of The Hague. The program begins with three masterly ballets by Jiří Kylián, the choreographer who brought world fame to The Hague-based Nederlands Dans Theater and whose work has frequently been included in the Holland Dance Festival. Introdans is also presenting Sidi Larbi Cherkaoui’s enchanting In Memoriam, a work that Introdans director Roel Voorintholt saw for the first time at the Holland Dance Festival and was so impressed by it that it has laid the foundations for a wonderful and warm working relationship between the Flemish-Moroccan choreographer and Voorintholt’s company.

Under a sky of burning candles
Introdans has built up a substantial Kylián oeuvre in recent years and now has no fewer than fifteen ballets by the master choreographer in its repertoire. In this festival the group presents two of them, plus a premiere work for the company. The performance opens with Un Ballo, a beautifully subdued, atmospheric music ballet to two compositions by Ravel, performed under a fairy sky of eighty lit candles. New to Introdans is Petite Mort, a masterpiece from Kylián’s famous black-and-white period set to the slow movements from Mozart’s two most famous piano concertos. Mozart was also the source of inspiration for the third work, Sechs Tänze, but in a very different way: in the absurdist work – full of ridiculous humor, dusty powder wigs, wheeled hoop skirts, affable nods and sad little pouty mouths – Kylián shows himself from his most playful and frenzied side.

Intoxicating
After the intermission the company will dance the full version of Cherkaoui’s widely acclaimed In Memoriam, in which the celebrated Moroccan-Flemish choreographer pays tribute to his ancestors and recently deceased relatives. The meditative choreography explores the link between reality and memory, set to beautiful polyphonic vocals by the Corsican ensemble A Filetta. In an imaginary underworld, the dancers explore magnetic and polarizing forces such as softness and aggression, attraction and repulsion, in order to fathom the meaning of the word “harmony. The effect is downright intoxicating.

PRINSES BEATRIX SPIERFONDS, INTRODANS & THE HOLLAND DANCE FESTIVAL
The extra festive performance on February 10th is all about the Prinses Beatrix Spierfonds. Dance symbolizes the ultimate freedom of movement. A freedom that starts with healthy muscles. For people with muscle disorders, this kind of freedom does not come naturally. That’s why Prinses Beatrix Spierfonds, Introdans and Holland Dance Festival are working together to raise money in order to fund research focused on curing muscle disorders. Dancers fight a daily battle to get the most out of their bodies. Unfortunately, people with muscle disorders are fighting a very different and unequal battle with their bodies. We’re using this contrast to raise awareness for muscle disorders with an evening filled with beautiful dance. 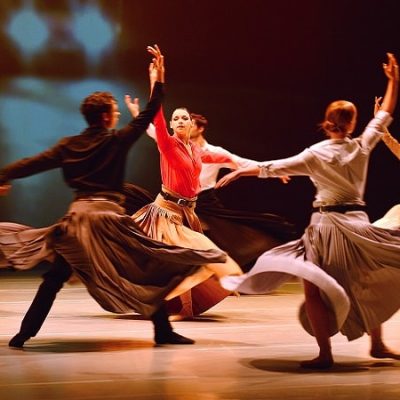